Home » Stay in the loop » Supporting our next sporting heroes

For most people, knowing you would rank 5th in the world at your chosen sport, might give you a bit of swag. If this world ranking was achieved at 14, one could be forgiven for being a touch arrogant. Particularly if you’ve been talent spotted at the age of 8, had the opportunity to meet and compete with your sporting heroes and if you’d broken 3 world records. Superiority abounds! Except, that is, if you are Lauren Booth.

What’s astonishing about Lauren is not how she’s overcome bacterial meningitis in her infancy, battled with cerebral palsy, hearing and mobility challenges to become a world class athlete, it’s how sincerely modest and considered she is with it all.

Being given a specially modified trike by the Meningitis Trust at 4 to ease the toddler’s increasing frustration at her lack of independence, whet Lauren’s appetite for wheels. She was soon determined she would ride her older brother’s bike. When she firmly rejected the condition that she’d need stabilizers, Lauren’s mother, Lisajayne played the ‘learn by your own mistakes’ parenting card and let Lauren get on the 2 wheeler, fully expecting to have to apply plasters and ‘I told you so’ shortly thereafter. She didn’t. To Lisajayne’s astonished joy, Lauren aced the bike from the off and was soon an enthusiastic member of the Chippenham Wheelers cycle club.

Lauren started going to the Castle Combe summer series and there, aged 8 she was spotted by a talent scout and invited to attend Saturday training sessions at the Newport Velodrome with Disability Sport Wales. 18 months in to this new-found passion for vertiginous speed, management at the velodrome changed the rules, disallowing anyone under the age of 10 from using the velodrome. Thrown into health and safety purgatory, Lauren had to wait a frustrating 6 months for double digits to get back on the track. By happy chance, her birthday that year fell on a Saturday and there was no question about where she would be blowing out her candles that year.

In 2013, Lauren broke her first World Record for the Flying 200; impressive at any age but considering she was 12 at the time, it was a double edged sword as her age precluded formal recognition of the achievement. It did, at least, lead to a sponsorship offer from Planet X who provided her with both a road and training bike. She’s smashed the record for her favourite event since then, and, through her love of the sport as much as anything, all other barriers she set her sights on.

We were almost as excited about the prospect of Lauren competing at the Tokyo Paralympics in 2020 as she was, but 2017 proved a difficult year for Lauren when the UCI (Cycling’s international governing body) decided that her disabilities were not deemed severe enough for paracycling classification. This meant that her Paralympic dream was suddenly in the broom wagon. I for one can’t really imagine how devastating that must have been, nor how hard it must have been to keep training and refocus. But that’s exactly what Lauren  did and she decided to look for alternative challenges.

Lauren found just the thing when she discovered Virtus, world intellectual impairment sport (formally INAS) and so immediately applied for classification. After testing and the inevitable long wait, she received confirmation that she was eligible to compete in their cycling competitions. It was back on! Few things have ever run as smoothly as a well fettled track bike for Lauren though and she had just missed the selection cut off for the European Games in Paris that year. Still undeterred, Lauren looked to the future and set her sights on selection for the Global Games in Brisbane Australia in October 2019.

The Global games are an Olympic equivalent for intellectually impaired athletes and in July 2019 Lauren received confirmation that she was finally going to represent Great Britain on the international stage. These athletes don’t receive any funding though so Lauren, never one to wait for the world to come to her, set about raising the money she needed to pay for her entry fees, travel and accommodation costs which included transportation of 3 bikes, spare wheels and equipment!

The Global Games was a massive success and the moment that Lauren really got to show what she’s made of. Lauren’s typically modest hopes, when setting out for the airport, were to stand on the podium. Never in her wildest dreams did she expect to be standing on the top step 6 times! Her incredible gold rush also displayed her range of abilities coming in a road race, individual and team time trials and three events in the velodrome. Lauren came home from Australia with six gold medals as well as being crowned World Champion six times.

So how did she plan to follow that? European games were planned for July 2020 in Portugal. Everything was booked and then, well, we all know what then. The pandemic also halted Lauren’s much-loved training at Newport velodrome three times a week so Lauren resorted to lockdown training indoors on the turbo trainer.  As things eventually eased Lauren was straight out on her home roads of Wiltshire clocking up hundreds of miles a week just to stay focused and fit.

While 2021 looks to be another year for athletes to write off, there’s the prospect of the Virtus 2022 European Games in Krakow Poland and the 2023 Global games in Vichy France. These are already marked in Lauren’s calendar and with the European games being Lauren’s first opportunity to defend her titles as well as aim for European champion to add to her title of World Champion.

TPSG have been involved with Lauren’s journey since 2013 when we started sponsoring her through the Funding Future Olympians and Paralympians initiative. We’ve been blown away by this young sportswoman whose talent is matched by her dedication and we are thrilled to play some small part in supporting her achievements and her ambitions. 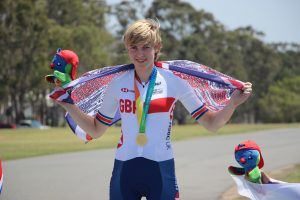 The SSAS is dead; long live the SIPP

We invite professional advisers and business owners to get in touch to discuss how we can help you and your clients.
Contact us
Request a call back